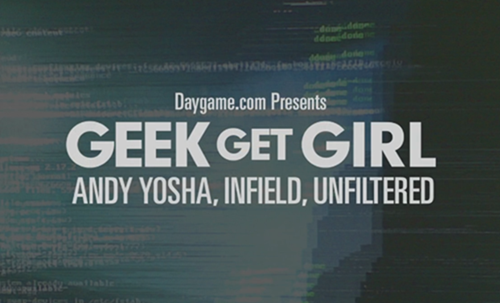 Do you know what the biggest problem is with most dating products?

(And this includes our own, like Daygame Blueprint and Date Against The Machine.)

What they show you isn’t totally reflective of reality. You’re seeing the end result of several failed attempts to capture the “perfect interaction” on video, cherry picking of the best footage and sometimes even (not in our case) post-editing of the footage to remove the parts you’re not supposed to see. In other words, idealised footage.

Look. Stuff like this better than nothing. I’m not knocking it.

I’d rather guys were studying products like these, and seeing what Daygame done right looks like, rather than reading crap on the Internet, or worse, giving up.

“Trying to learn Daygame by watching the end result of the learning process is like trying to put together a scale model of the Titanic by studying the photo on the box.”

Many guys — maybe you too — watch dating products like these, and then head out to the streets or a nightclub and try it out. What they experience usually doesn’t look anything like what they saw their favourite guru do. That’s because they never saw the mistakes and sticking points the guru had to work through, to get to the stage where his techniques finally started working.

How To Nail Daygame FAST

(Yes, It Absolutely Is Possible)

Since I founded Daygame.com five years ago, I’ve personally coached literally hundreds of men all around the world. I’ve seen young guys, old guys, short guys, tall guys, fat guys, skinny guys, broke guys, minted guys, ugly guys, drop-dead handsome guys and even complete weirdos transform before my eyes. Honestly, in the space of just a few days, they went from being hopeless losers with women to studs whose world is their oyster.

Do you know what made them get good so fast?

Video analysis. Every student who’s ever done one of our bootcamps will tell you, this is by far the most valuable part of the training.

You can practice the Yad Stop twenty times a day for the next six months. There’s no doubting you’ll improve dramatically. Yet, you can make the same process literally overnight. It just takes a trained eye to watch your infields, and point out exactly where you’re going wrong.

When you see a mistake pointed out to you on video, watch with your own eyes how this mistake is turning girls off, correct that same mistake, and then feel for yourself how your game has radically improved, it does something weird to your brain.

It drives something home, something every wannabe Daygamer knows in their head but very few know in their hearts — that the smallest differences in technique change everything.

Seriously. The way you hold out your hand, the angle of your chin, the direction your project your voice, where you’re looking, whether you’re smiling like the Joker or smirking like Hans Solo — small details like this are the difference between you landing a girl who “should” be way out your league, or heading home alone for a Pot Noodle and wank.

“Most the errors in your technique are invisible to you, because you don’t know what these errors look like. You just know what “perfect” Daygame looks like.”

You need to know how to spot the errors you’re making. That’s why watching videos of your favourite guru’s perfect approaches only gets you so far.

That’s why I wanted to create and brand new product — to fix this gap in the Daygame curriculum, and help guys like you achieve mastery much quicker.

The World’s Most Realistic And Most

Now, before we go any further, let’s get clear about something.

I am not a beginner Daygamer. (That said, when we filmed this product, I hadn’t really been doing much Daygaming for three months. I was too busy working on the business, studying and following other passions.) Therefore, in order to capture as many mistakes as possible, I wanted to make things as difficult as I could.

We did a bit of digging around, and found out that New York Fashion Week was taking place right at the beginning of September in Manhattan. Perfect. Because I’ve found that, generally, New York is one of the toughest cities in the world for approaching women. Even better, the city would be full of models.

I didn’t stop there though.

Like I said, I wanted to capture as many mistakes as possible, so you can learn tonnes from these infields. That is why, for the whole week, I approached only the most intimidatingly attractive, goddess like girls I could find — girls who genuinely made me feel nervous.

This is Daygame on hard mode.

Martin — the Daygame.com camera man, and a solid Daygamer in his own right — and I headed over to New York City towards the end of August, just in time for the run up to New York Fashion Week.

For seven days solid, we pounded the streets searching for the absolute hottest women we could find. I approached, Martin filmed, and at the end of each day we sat down together and analysed every single approach, picking apart all the mistakes and laying them bare.

After seven days in New York, working past the sticking points we dug up from analysing the infields, my Daygame was on steroids. We jumped on a flight to Toronto, and continued the journey to mastery for another two days.

Videos Of Your Favourite Blonde Geek

These videos are real and 100% unadulterated. (We’ve only blurred faces and removed personal information.) There’s been no cherry picking. You get to see all the rejections, all the successes and everything in between.

Each one comes complete with infield analysis. Martin and I point out where I fucked up and what I could have done differently to make it a winner. (In subsequent videos, you can see where I implement these improvements and the effect it has on my Daygame.) Where the interaction went well, we point out the subtle “game-changers” that made it a success.

Some of them are shit, and have ZERO educational value. I’m serious about this. Like I said, we didn’t take anything out. You get to see every single approach I made during these nine days. Even the flat out rejections that lasted little more than ten seconds, that you couldn’t possible learn anything from.

This is a real “day in the life” of hardcore Daygame.